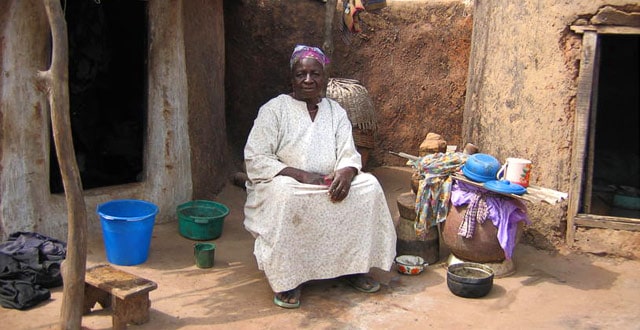 The Witches of Gambaga is the extraordinary story of a community of women condemned to live as witches in Northern Ghana. Made over the course of 5 years, this disturbing expose is the product of a collaboration between members of the 100 strong community of ‘witches’ and women’s movement activists determined to end abusive practises and improve women’s lives in Africa. Painful experience and insight come together to create an intimate portrait of the lives of women ostracised by their communities. Told largely by the women themselves, their incredible stories and struggles are conveyed to a wide range of audiences by the director’s narration. The film was completed in July 2010 by Fadoa Films Ghana and UK. It was directed by Yaba Badoe, and co-produced by Yaba Badoe and Amina Mama.
Watch the trailer ›

Why I made The Witches of Gambaga

“Within 24 hours of meeting women condemned to live as ‘witches’ at Gambaga in March 1995, I knew that I had to make a documentary about their lives. The more I listened to their stories, the more determined I became to use film as a way to challenge beliefs that demonize women. Asana Mahama was tortured by her brother who threatened to pluck out her eyes if she didn’t confess to witchcraft. Bintook Duut was on the run for her life for three months before she found refuge at the camp. Nobody knows the number of alleged witches who never find sanctuary, but I wanted Ghanaians and other Africans, to hear what has happened to women who have lived to tell their tales.”
Yaba Badoe, director and co-producer
Find out more ›

Yaba Badoe is a Ghanaian-British documentary filmmaker and writer. A graduate of King’s College Cambridge, she worked as a civil servant in Ghana before becoming a General Trainee with the BBC. She has taught in Spain and Jamaica and has worked as a producer and director making documentaries for the main terrestrial channels in Britain and the University of Ghana in Accra. Her short stories have been published in Critical Quarterly and in African Love Stories: an anthology edited by Ama Ata Aidoo. In 2009, her first novel, True Murder was published by Jonathan Cape. Her TV credits include: Black and White, a ground-breaking investigation into race and racism in Bristol, using hidden video cameras for BBC1; I Want Your Sex, for Channel 4 and a six-part series, VSO, for ITV. African Love Stories is now available in Swedish from Tranan publishers under the title Kärlek x 21.

Darren Hercher studied documentary photography at Newport School of Art in Wales and graduated in 1999. He worked as a freelance cameraman in London for several years before directing his own films. His first film Send Me Somewhere Special won Best Newcomer 2005 at the Grierson Awards and Best Documentary at Britspotting 2006. His next film The Downhill Racer went on to win the Best Documentary Feature at the Celtic Media Awards 2007. In 2008 he moved to Glasgow to make Sighthill Stories, which won the Scottish Bafta for Best Factual Programme in 2009. He lives and works in Glasgow.

Yao Ladzekpo teaches cinematography at the National Film and Television Institute in Accra, Ghana and at the New York University of Ghana campus. An award winning cameraman, he works on commercials, feature films, Reality TV shows and television drama.